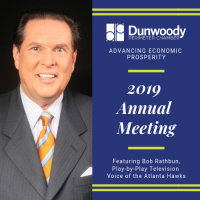 Fogo de Chao | *Complimentary valet will be provided for attendees.

Registration will end on Monday, March 25 at 10 a.m., no walk-ins will be accepted, and no refunds will be given. Payment is required by credit card at the time of registration.

Sponsorships, beginning at $500, are also available for this event; please visit here to view opportunities; you may register for sponsorships by visiting the ‘register now’ link on this page.

*View of speaker may be obstructed, depending on seating; audio/visual aids will be provided.

Please join the Dunwoody Perimeter Chamber on Thursday, March 28, 2019,  from 10 a.m. to 12:30 p.m. as we celebrate another year of service at our 2019 Annual Meeting Luncheon at Fogo De Chao. The event will include a review and forecast, honoring of retiring Directors, installation of new Directors, passing of the gavel from 2018 Chair of the Board Jeanne Landry to 2019 Chair Bill Baker, and a special keynote address by Emmy award-winning broadcaster & voice of the Atlanta Hawks, Bob Rathbun.

Rathbun entered his 23rd season as the play-by-play television voice for the Atlanta Hawks in 2018. Rathbun has earned ten Southeastern Regional Emmys from the National Association of Television Arts and Sciences (NATAS). Annually, Bob broadcasts well over 100 games and events. He is the signature voice for Fox Sports South, handling the networks’ play-by-play responsibilities for the Atlanta Hawks. He also announces numerous college football, basketball, and baseball games for various television networks.

In 2004, Bob expanded his work into the realms of motivation, leadership, and team building, when he joined John Maxwell’s Maximum Impact Speakers Bureau as a host and speaker. Bob is also a past host of Nightingale-Conant’s Success Streams audio series. Bob’s experience as an announcer and interviewer make him an outstanding keynote speaker and lecturer. Hired in August of 2004 to spearhead the Atlanta Hawks Speaker’s Bureau, Bob works on increasing the profile of the Atlanta Hawks properties — Hawks and Philips Arena — through speaking engagements with civic, community, religious and other local groups.

The event will begin with 2018 Chair Jeanne Landry (Emory Saint Joseph’s Hospital) highlighting the many accomplishments of the Chamber including leading, connecting, and growing before passing the gavel to 2019 Chair Bill Baker (Perimeter Mall | Brookfield Properties). Upon receiving the gavel, Baker will give a forecast of the 2019 year including plans to engage in economic development, foster collaborative leadership and advocate for business prosperity.

Directors whose terms expired at the closure of 2018 will be thanked for their service in helping the organization to strategically advance include:

2019 has brought several new faces to the Board of Directors who will be installed for their respective terms include:

Other highlights of the event will include excellent networking and a delicious lunch provided by Fogo de Chao.