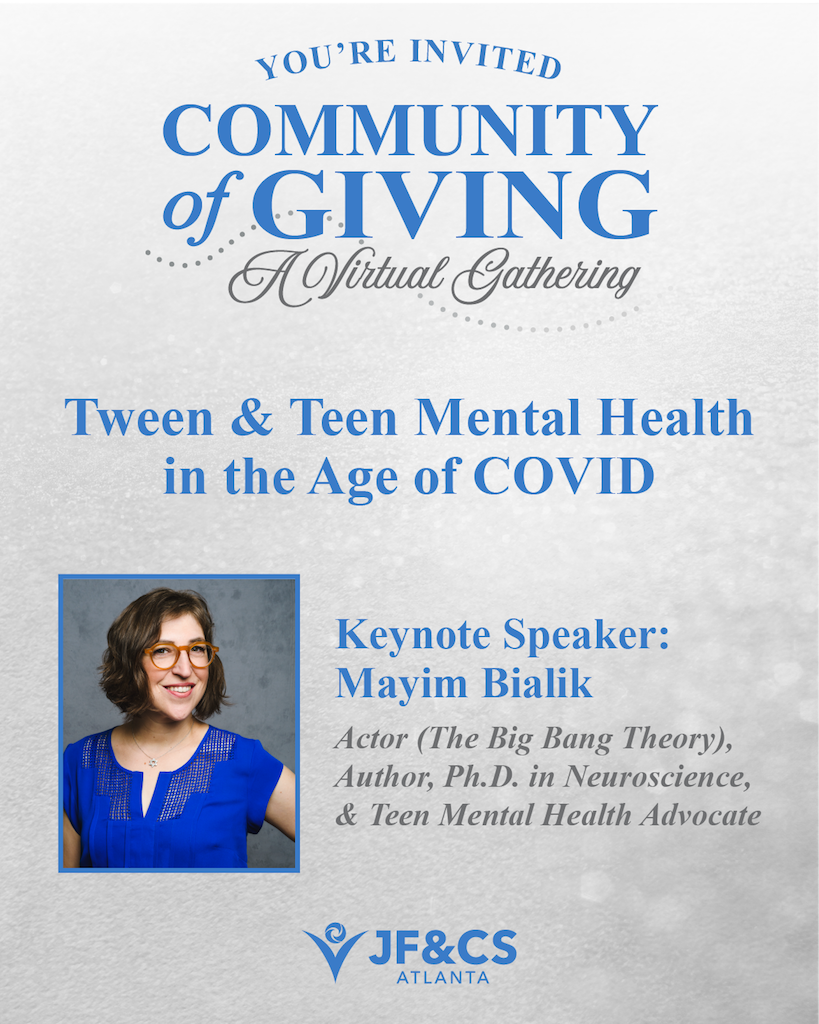 Jewish Family & Career Services of Atlanta (JF&CS) will host “Tween and Teen Mental Health in the Age of Covid” presenting The Big Bang Theory’s Mayim Bialik, Ph.D. in Neuroscience, Author, and Teen Mental Health Advocate at a special fundraiser, Community of Giving, A Virtual Gathering, on Giving Tuesday, Dec. 1, 2020.Mayim Hoya Bialik is best known for her lead role as Blossom Russo in the early-1990s NBC television sitcom Blossom. She is most recently known for playing the role of Amy Farrah Fowler on the hit CBS comedy, The Big Bang Theory. The role received multiple accolades with 2 Critics’ Choice Award wins, 4 Emmy nominations and a SAG Award nomination.

Following the iconic show’s ending, Bialik and her production company, Sad Clown Productions, announced her new series for FOX, Call Me Kat, which she will star in, and Executive Produce with her former co-star Jim Parsons. She’s also launching a podcast on mental health this Fall titled Mayim Bialik’s Breakdown. After Blossom, Bialik took a break from acting to earn a BS and Ph.D. in Neuroscience from UCLA. She’s authored a myriad of books, 2 of which reached #1 on the New York Times Best-Sellers list (Girling Up: How to Be Strong, Smart and Spectacular and Boying Up: How to be Brave, Bold and Brilliant).

This event will have a focus on the mental health of teenagers, a group that has been hit particularly hard during this time of isolation. Anxiety and depression have been increasing exponentially since the start of the Pandemic. Bialik has been helping to break the stigma by being open about her own depression. She brings a personal and scientific approach to the topic. General admission tickets are available for $36 each, admission and catered meal for one guest is $180, and admission plus a family meal is $360.

There are many ways to honor the legacy of Dr. Martin Luther King, Jr. around Dunwoody, Atlanta and virtually. Check our Facebook page for some ideas. ...

On 12/24/20 at approximately 12:40 p.m. three unknown black males entered the Macy's Department Store at Perimeter Mall and committed the criminal offence of shoplifting. When confronted by the store loss prevention officer, one of the suspects brandished a handgun and pointed the weapon at the mentioned store associate. All three suspects fled the store into the parking lot. The associate did not see the particular vehicle the suspects may have left in.

Anyone with information regarding this incident or the identity of suspects involved is asked to contact Dunwoody Police Department Case Detective: C. Gilbert at 678-382-6997 caleb.gilbert@dunwoodyga.gov or submit an ANONYMOUS TIP at https://bit.ly/DunwoodyPD_Submit_a_Tip ...

Our top posts of 2020 with the largest reach. As we reflect on all we suffered in 2020, it is inspiring to also look back on all the stories of perseverance and community support. ...

Michael's wine is available at @vinovenue 🥂 100% of the proceeds from this delicious Italian wine go to Sarcoma research. ...

Merry Christmas to you and yours from the Aha! families. ...

No waiting for early voting at the Dunwoody library. Thank you to all the staff and volunteers that made it such an easy process. ...

Look out to the southwest to see "the nativity star" aka Jupiter and Saturn closer than they've been in 800 years! 📸: @shannon.dill ...