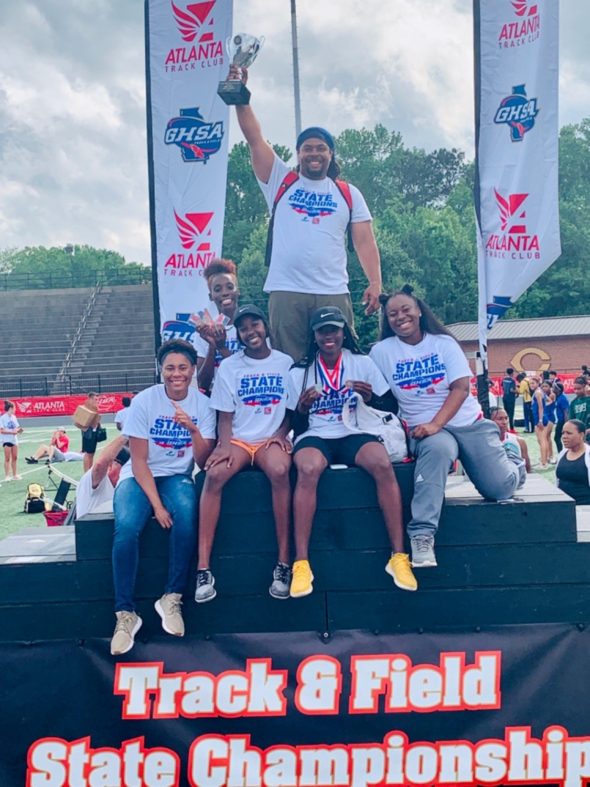 During the 2019 Georgia High School Association 6A Track and Field Championships at Carrolton High School on May 9th thru May 11th.

Carrolton High School, May 9th – May 11th. Dunwoody Lady Wildcats Track and Field Team won the GHSA 6A Championship Title. The High School reached this milestone against 56 other schools throughout Georgia.

The Dunwoody Lady Wildcats would begin their campaign with a HUGE High Jump from Jahvene Walder. Jahvene would set a PR with a Jump of 5 feet 4 inches. She would put her team on the board with a lot more field action to follow.

A Strong Long Jump from defending title, Ariel Lawrence of over 19 feet would make the competition take notice. She would place 3rd in an extremely talented field. This fighting Lady Wildcat wouldn’t quit with just this. She would then return to the pits for Triple Jump. There she would break her own school record and come within an inch of first place with a massive leap of almost 40 feet. Showing that the Lady Wildcats came to place.

The Lady Wildcats continued their field dominance as the throws were being contested. In the discus Janae Profit would place 3rd amongst the State’s strongest discus throwers with a whopping throw of over 144 feet. That mark would be just the beginning as Profit moved onto the Shot Put ring. There she would truly be a “Rockslinger” with a toss of over 43 feet crowning her the Shot Put State Champion.

The Lady Wildcats were in first position with only the hurdles and the 4X100 team left to put points on the board. They would have to hope that this would be enough against very strong Cambridge and Alexander teams.

Jahvene would qualify for both the 100 and 300 hurdles that would take place the next day. The 4X100 team, consisting of Jaden Alexis, Kameran Haliday, Ariel Lawrence and Jahvene Walder would fight to qualify amidst some of the toughest teams in the state. They would be edged out by less than a second.

That would leave the hopes of a title in the hands of senior, Jahvene Walder. Jahvene would place 3rd in the 100 meter hurdles and await the 300M hurdles with anticipation. Thanks to the constant calculations by Coach Best and Coach Buggs, Jahvene knew that she needed to place 2nd or better to secure the Lady Wildcats a spot. Fighting through fatigue and the knowledge of her entire team depending on her, Jahvene set the track on fire and placed 2nd in the 300M hurdles.

The Lady Wildcats waited anxiously for the results of the 4X400. It was going to be close, but the Lady Wildcats had done it. They won the GHSA 6A Track and Field Championships and they were gladly bringing the cup back home to Dunwoody High School

Congratulations Lady Wildcats on your successful journey!! You’ve worked hard and this is just a sample of your reward