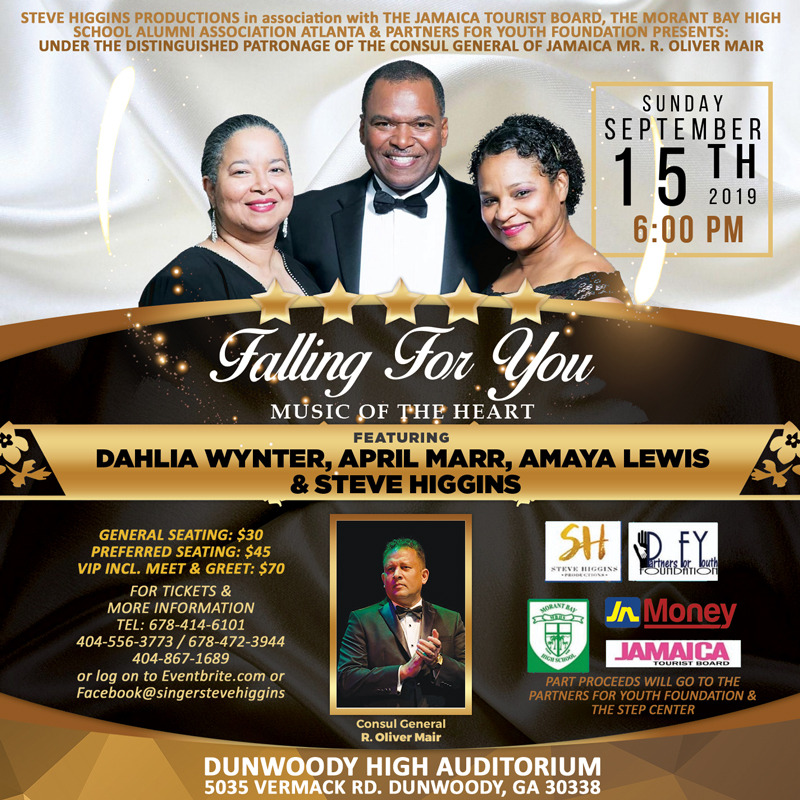 September 9, 2019. Ft Lauderdale – Atlanta will once more receive a spectacular treat when Steve Higgins & Friends present their 2019 performance from their Annual “Evening of Excellence” musical concert series at the new and improved Dunwoody High School Auditorium, beginning at 6:00pm. This year’s theme will be “Music of the Heart!”
The concert will feature lyric soprano Dahlia Wynter, April Marr (Mezzo-soprano) and Steve Higgins (Tenor) and come to us sponsored by The Jamaica Tourist Board .
Special guest for our 2019 show will be Jamaica’s Consul General Oliver Mair – himself a performer and impresario- who will give a brief address. “I am thrilled to be visiting the great city of Atlanta and to lend support to the Steve Higgins & Friends’ outreach and contribution to the international community”, said the Consul General.
Steve Higgins Productions will be making part proceeds available to the Bahamas recovery fund through three of their concerts- Miami, Ft Lauderdale & Atlanta.
The troupe comes fresh from their show in The Cayman Islands, where they received standing ovations from a packed ballroom of tremendously enthusiastic audiences. The Singers started their 2019 Concert series in Ft Lauderdale earlier this year. From Atlanta, they will next appear in Miami, Florida (September 22nd) then to New York on September 28th, before Higgins heads to The United Kingdom.

While in the United Kingdom, Higgins will perform for the Association of Jamaican Nationals Heroes Gala Awards Banquet at Aston Villa (in Birmingham), before heading to Scotland where he will perform at the historic Rosslyn Chapel (of DaVinci Code fame, built in the mid-15th Century) and the St. Cecelia’s Hall, Edinburgh, built in 1763.