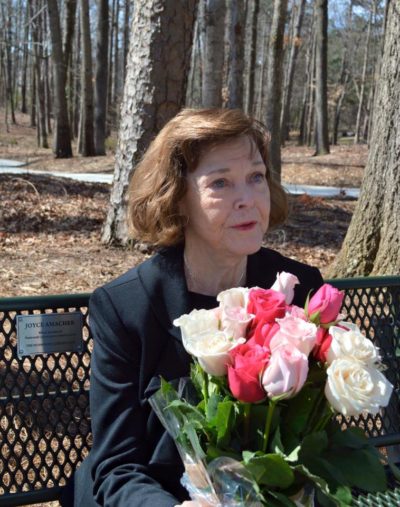 Vera Joyce Amacher, Dunwoody GA – passed away peacefully Sunday, February 26th at her home in Dunwoody at the age of 84.

Joyce was born on November 28, 1932 in Atlanta, GA to the late Emmett and Louis McClellan. She was a graduate of West Fulton High School where she was a star of the theater program. She attended the Crawford Long School of Nursing and enjoyed a career in pediatric nursing.

Joyce married William C. Amacher on December 11, 1965. Joyce and Bill moved to Dunwoody in 1968 and she became active in the Dunwoody community. Joyce was an involved member of the Dunwoody United Methodist Church and served for many years on the Altar Guild and was a member of the Crusaders Sunday School class.

Joyce had a passion for flowers and was a master floral designer. Many referred to her as a professional volunteer. She was a member and officer of many organizations including Dunwoody Garden Club, Dunwoody Homeowners Association, and Dunwoody Preservation Trust. Notable achievements she spearheaded would be the “Fight to Save Dunwoody” in the late 1970s, an effort to maintain the architectural integrity of the Dunwoody Community, Committee member of the first Dunwoody July 4th Parade and later Grand Marshall, the Ashford Dunwoody Road Beautification Project, the Replant the Dunwoody Forest, where 20,000 trees were replanted after a devastating tornado, creating Dunwoody Lemonade Days at Brook Run Park, and Co-Chairing the efforts to save the Dunwoody Farm House from demolition and many, many more.

Joyce was a devoted wife, loving mother, and sweet grandmother.

A Memorial Service will be held on Saturday, March 4th at 10:30 am in the Sanctuary of Dunwoody United Methodist Church. Service will be led by Reverend B. Wiley Stephens, with a reception to follow.

In lieu of flowers, donations may be made to the Dunwoody Garden Club, Joyce Amacher Fund, c/o Donna Burt, 2772 Joel Place, Dunwoody, GA 30360.